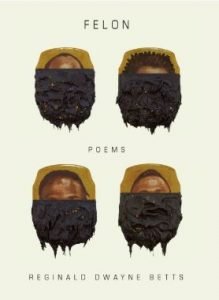 On September 26, 2019, the Law Library offered the CLE Poetry for Lawyers, taught by Joseph Tomain, Dean Emeritus and the Wilbert and Helen Ziegler Professor of Law, University of Cincinnati College of Law.

None of us could have imaged what happened a few weeks later, on October 15th.

Law in popular culture is not a “new” thing. In addition to the inherent drama packed into legal cases, many attorneys practicing today credit Perry Mason, Atticus Finch, or according to the ABA Journal, most recently, Elle Woods, for inspiring them to become an attorney. And, the drama in law lends itself to countless “ripped from the headlines” fiction publications every year.

But, a book of poetry, written by an attorney can be just a little bit rarer.

At their core, lawyers are story tellers.  It is part of the job and part of the mystique.   Many law students start out by studying literature, to better understand how to write, by reading, and analyzing stories—and poems.

In Felon, Mr. Betts shared a bit of his story—which was a roundabout route to Yale Law School.  Because, unlike most 1Ls, Mr. Betts started out in prison.  He is the “felon” of his title.  And, according to an interview about the book that he gave to NPR, part of his impetus for writing these particular poems at this particular time was because his children had not known his history, and he wanted to tell his story.

Many of the poems describe Mr. Betts’ experience in prison.

But, what struck me most in reading the poems, are the 4 experimental poems that are collectively called “The redaction poems.”    And, they are most interesting for what they take out.

The “Redaction Poems,” that is In Alabama, In California, In Houston, and In Missouri, look different on the page than all of the other poems in the book.  Because they are.

Based on the table of contents, I expected to find poems of place, describing experiences or people there. But, instead, they are redacted pleadings.  Each one of them, is a redacted pleading, and the “In…..” is a locator of place, only because the words are left behind from the redacted caption.   And, as poems, not only do they work, but, they are fascinating.

Mr. Betts crafts these blackout poems out of someone else’s words. Their words, as part of the litigation documents, become his words, as he pulls out ideas of justice and fairness from the body of the pleadings.

If you only read 4 poems in 2020, I would recommend reading these.

And, although the book is not currently in our collection, you can find it (for free) on Overdrive, which you can access with your (free) library card at the Public Library of Cincinnati and Hamilton County.